If anyone had told me I could raise a litter of German Shepherd puppies from birth through 10 weeks in my home without going stark raving mad,  I would never have believed them!

Prior to Puppy Culture, we raised puppies inside our home for the first six weeks. Then, when the poop got too much, we moved them outside to a large indoor/outdoor puppy pen and yard. Good enough, right? We thought so, and indeed this worked okay for many years.

But times, and paradigms, change. Along came Puppy Culture and it’s community of breeders dedicated to doing the best they can for their puppies, to challenge us to do better.

While our older model worked well, we missed out on a lot – our puppies AND their new owners. There was so much more we could accomplish if the puppies were inside the house. We could spend our time on more than just poop patrol! We had been doing good, but Puppy Culture showed us how much better we could be doing.

I became dedicated to figuring out and perfecting how to teaching my puppies what they needed to know to live inside with us the full nine to ten weeks.  With less time spent cleaning messes, I would have the time to really work through the Puppy Culture protocols. If I was going to keep a bunch of little poop machines in my house for weeks on end, I decided they would have to be litter box trained.  Litter box training is covered in Puppy Culture, but what worked for me is just a little bit different. As an unexpected bonus, our puppies were significantly easier for their new families to house train.  Talk about a win-win!

Here’s what I learned in a week by week guide. 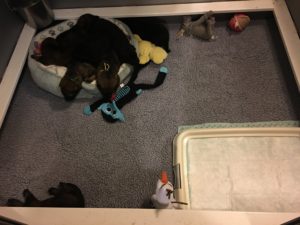 First toilet! I want to leave room for the dam, so it’s just one pad/holder and a small bed.

2-3 Weeks:  I put  a small potty pad on the west wall of the whelping box.  I have found it’s really important to keep the litter box in the same place. When I’ve done it this way, and I make the pen larger, they can always find the litter box and I have fewer misses.     On the other side I place a small bed.   So, sleep area and toilet area, baby version.   The puppies hit the toilet about 10% to 20% of the time. 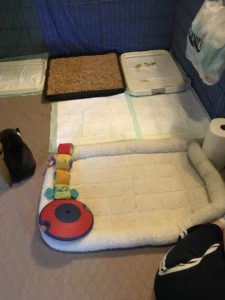 4-6 Weeks:   As per Puppy Culture protocols, we move puppies to the weaning pen around week 4.   I remove the whelping box and put the larger toilet where the whelping box toliet was, along the western wall of our dog room.  In front of the new toilet is a slightly larger play area. On the eastern side of the pen I put in a row of small puppy beds (during week 4) and small crates (week 5).  Before I add the crates I want to be sure the puppies are NOT urinating on their bed area. They don’t have to make it all the way to the litter box, but are at least moving off their bed area.  Once the puppies are moving off their bed area to urinate, I add the crates.   By now the puppies poop in the toilet most of the time, but they still miss as much as they hit with pee. 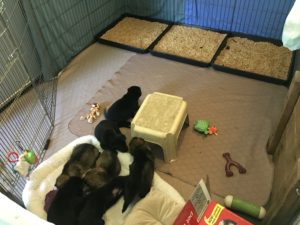 It’s important to have realistic expectations.  During week 4 the puppies rarely make it all the way to the toilet to urinate, they are just not mature enough. What I’m looking for is that the pee spots on the brown pads are moving CLOSER to the toilet. This tells me the puppies are learning to move away from their bed and play area to potty, which is an important skill. 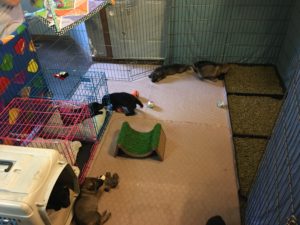 Please don’t expect your puppies to be perfectly litter box trained. They are not adults, we are just looking for an effort to reach the toilet to tell us the puppies are learning and trying.

What I used, with links at the end of the blog:

TIP!   I have learned that keeping the toilet in the same place speeds toilet training.   Now, I always have the toilet on the west wall of their pen, even starting as early as the whelping pen pad, and THAT was really helpful.  On previous litters I experimented and moved the toilet around often, that really made it harder for my puppies to have success.   My suggestion is that you decide before the litter is born how you will build out from the whelping box, to the weaning pen, to the toddler pen.  Plan in advance, so your litter box will stay in the same area the entire time. 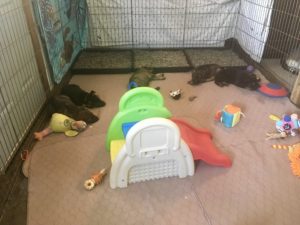 The now expanded weaning pen, the litter box is in the same position, the play area is larger to meet the needs of our growing puppies.

Week 6-7.  At the end of week 5 we enlarge the weaning pen.  The puppies are now using the toilet most (but not all) of the time and their pen is enlarged to make room for more exercise and passive enrichment.   At this point you can also see the door is available (left) to their puppy patio outside.  The crates are still on the wall opposite of the toilet, and our crate conditioning plan is in full force.  The pen opens into the kitchen and living room (right), and outdoors (left).   We are still using the three pan toilet for these two weeks.   Please note, there are still plenty of pees outside the toilet, but most of the poop is inside the toilet.

Week 8-10: For the last two or three weeks the puppies are with us, we expand the weaning pen until it takes up the entire dog room. I found my puppies do not like to touch poop, and will choose to poop outside of the box if they must touch poop to void inside the box.  Not a problem during the day when we pick up constantly, but at night the box can get poopy.  Once this starts, I switch my smaller boxes out for the largest boxes that are 24″x36″ – and at night i put the three smaller boxes down in front of those bigger ones! 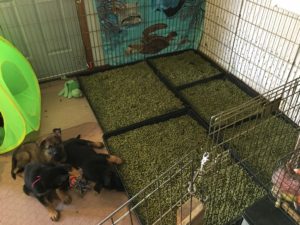 Our largest litter box area, we use this at night for large litters in weeks 7 and 8.

This photo shows the boxes reversed! This largest toilet helps the puppies succeed in getting fully into the box to void, even if there are some poops in it.   Puppies are now taken outside for potty breaks as often as possible, through their exterior door and onto their puppy patio outside.   They still need and use their litter box however, and there is the occasional accident on the EZ whelp pads.

By now we are encouraging the puppies to void outside. They have a doggie door that leads to their puppy patio, so they can go outside often on their own.

What I add this week:

I hope this guide helps you litter box train your own puppies. We found by starting early, creating an environment designed for success, and not expecting perfection we have been able to enjoy having our puppies in the house with us with far LESS work than ever imagined. This has freed up even more time to implement Puppy Cultures core protocols, active enrichment, training, socialization and teaching puppies to be enrichment seekers.

If you would like more in depth methods and personal coaching on litter box training for breeders, please check out my NEW course – Poop School: Litter Box Training for Breeders and Fosters.

Throw us a bone? The above links are affiliate links. These are products we have used and loved. We get a small amount of money for purchases from these links.