Crates are a great management tool for new families, keeping puppy safe and out of trouble, but the new family can’t take advantage of crates and x pens if the puppy panics when placed inside. 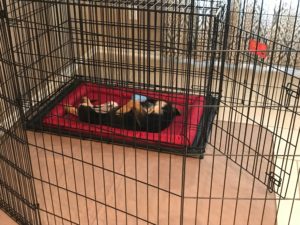 Rook lounging in his crate, with attached x pen, during his transition week. Because Rook associated confinement with good things, he was easily able to relax when confined in his new home, right from the start.

One of the greatest gifts you can give your puppy and it’s future family is investing in creating a Positive Conditioned Emotional Response to being both crated and confined in an x pen. Both are tools your puppy family needs to use to manage their puppy’s behavior in the first hours, days, weeks, and months of it’s life. By taking some time to create a positive association with the crate, the puppy will be better able to self soothe and self calm when confined in a strange environment, because it views the crate as a source of comfort. 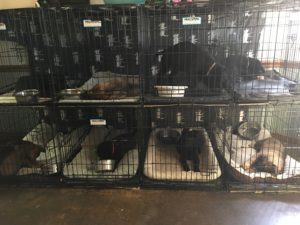 Conversely, if your puppy has had rushed and forced confinement and so has formed at Negative Conditioned Emotional Response to confinement, this may express itself during transition stress as excessive vocalization, panic, refusal to enter the crate, or urinating/defecating when confined.  While stress is a necessary part of any transition, distress is not, and can lead to panic and a less than ideal outcome.

If you want to learn about how we use choice and chews to condition puppies to love confinement read about it here!

Sign up to keep up with all our stuff! Litter and breeding announcements, new blogs, product recommendations, and new courses. Plus my garden, dinner, and other country life updates.